Emily Arsenault has worked as a lexicographer, an English teacher, a children’s librarian, and a Peace Corps volunteer. She wrote The Broken Teaglass to pass the long, quiet evenings in her mud 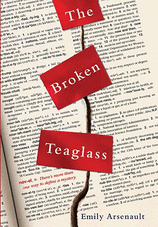 brick house while living in rural South Africa. She now lives in Shelburne Falls, Massachusetts, with her husband.

She applied the Page 69 Test to The Broken Teaglass and reported the following:

The Broken Teaglass is two books in one, each with its own narrator—the main narrator, Billy, and the occasional, elusive narrator of the book-within-the-book, also called The Broken Teaglass. Billy and his coworker Mona discover fragments of this book hidden within the citation files of the dictionary company where they work.

In the scene on page 69, the two young editors are reviewing a citation from the apparently fictitious book while drinking beer after work. The citation (half of which appears on p. 69) mentions a corpse and junkie slang, which Mona considers to be an odd, even humorous, juxtaposition. The conversation that follows the citation gives one a good sense of Billy’s and Mona’s relationship. They aren’t sure how seriously to take these ominous citations—or, for that matter, each other. Their banter here—and page 69 in general—is indeed representative of the book. While there is an element of mystery in The Broken Teaglass, at its core it’s a playful book that’s more about words and people than murder.

You said that junk slang was your favorite, and wanted to know if there was a chapter on junk. Then you asked if I’d finished that other book yet. No, I whispered. I was unraveling fast. Was it a trick question? What exactly had been in that article that I hadn’t had time to read? Was there something suspect near the corpse? Were you smiling, Red, because of something you knew?

I read it over a couple of times. Mona went to the refrigerator, got out a beer, and placed it quietly next to my hand.

“I think that’s a good idea. Now that we’re dealing with a corpse and all.” I snapped open the can.

“You know what I think is interesting about this one?”

I took a long sip.

“Don’t you find the mention of the corpse a little casual? I mean, it’s mentioned almost like an afterthought.”

“Come on. Mixed up in some conversation about junkie slang? I think this is supposed to be amusing.”

Read an excerpt from The Broken Teaglass, and learn more about the book and author at Emily Arsenault's website.