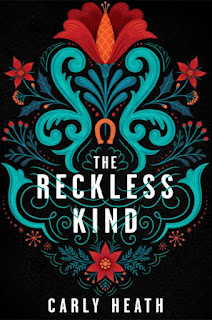 Heath teaches design, art, theater, and writing for various colleges and universities. She currently lives on the West Coast and tends a menagerie of rescued farm animals.

Heath applied the Page 69 Test to The Reckless Kind, her first novel, and reported the following:

Page 69 of The Reckless Kind features one of my favorite scenes in the book. It takes place in the doctor’s house after Erlend’s boyfriend, Gunnar Fuglestad, has been attacked by the cowardly little miscreant, Nils. Erlend’s father arrives and demands that Erlend go to Nils’ family and apologize for the vengeance Erlend had unleashed on Nils’ face (Erlend beat him up really badly, breaking Nils’ jaw and nose). Erlend, of course, refuses. Near the end of the page, Erlend says:“I’m not leaving Fuglestad.” And that, really, is Erlend’s thesis statement in the whole book—whatever happens, he’s committed to Gunnar through everything.

What’s interesting about the page 69 test in regards to The Reckless Kind is that the book is dual POV and though Asta is more of the main character and has more page time throughout the book, page 69 lands on a scene where Asta is watching the other POV character—Erlend. She’s observing him do something she’s been yearning to do for so long—explicitly defy parental authority. This scene does a very good job of conveying what the book is about—knowing what’s right, sticking to your convictions even when the forces of authority are pressuring you to submit. It also happens to be a scene where all three characters are featured together and the main conflict that will emerge between them is hinted at: Gunnar’s guilt over being the cause of a rift between Erlend and his parents.

This is the scene that will inspire Asta to (in a few pages) resist the parental authority figure in her life. Indeed, the themes seeded and the choices made on page 69 develop throughout the rest of the book, so—yes—page 69 is an apt microcosm of the whole work. Certainly the “energy” of the work is there—that feeling of standing up and saying “no” which is a crucial vibe of the book.