"Shoot the Moonlight Out"

William Boyle is from Brooklyn, New York. He’s the author of five novels: Gravesend, which was nominated for the Grand Prix de Littérature Policière in France 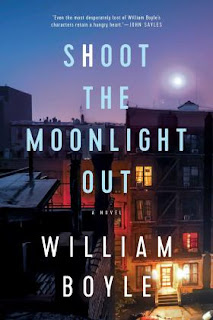 and shortlisted for the John Creasey (New Blood) Dagger in the UK; The Lonely Witness, which was nominated for the Hammett Prize and the Grand Prix de Littérature Policière; A Friend Is a Gift You Give Yourself, an Amazon Best Book in 2019 and winner of the Prix Transfuge du meilleur polar étranger in France; City of Margins, a Washington Post Best Thriller and Mystery Book of 2020; and, most recently, Shoot the Moonlight Out. All are available from Pegasus Crime. He lives in Oxford, Mississippi.

Boyle applied the Page 69 Test to Shoot the Moonlight Out and reported the following:

Page 69 of my new novel, Shoot the Moonlight Out, is the end of a chapter where Lily Murphy—recently returned to southern Brooklyn from college in Pennsylvania—has retreated to her room in her mother's new apartment. She's just back from teaching a writing class in the basement of her childhood church and has received an ominous, threatening message from her ex-boyfriend. It is June 2001. Lily is adrift. In her room, she puts on a CD—Nina Nastasia's Dogs—that she bought because it was on her favorite employee’s recommendation shelf at the record store in her college town. An excerpt: "She's been listening to it [Dogs] a lot lately. It fits her mood. She opens her window, sits on the bed, and the noise from the street competes with the music. Horns, voices, sirens." Though it's a short page at the end of a chapter, I think this scene gives readers a pretty good idea of the whole work. Melancholy and worry. City noises. Music. A character searching for something and running from something. A feeling of dread. Some hope, too. Lily and her perceptions of the world are central to the story. If readers opened to this page and read just a few lines, they'd have, I think, a glimpse into the heart of the book.

The Page 69 Test: Gravesend and The Lonely Witness.

The Page 69 Test: City of Margins.