After spending the 1990s as a homeless heroin addict in San Francisco, Joe Clifford got off the streets and turned his 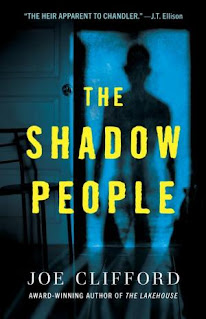 life around. He earned his MFA from Florida International University in 2008, before returning to the Bay Area, where he currently lives with his wife and two sons (Holden and Jackson Kerouac). His autobiographical novel, Junkie Love, chronicles his battle with drugs and was published by Battered Suitcase (2010). He is the author of the award-winning Jay Porter series, as well as several standalones including The One That Got Away, The Lakehouse, and the newly released The Shadow People.

Clifford applied the Page 69 Test to The Shadow People and reported the following:

The Shadow People centers around Brandon Cossey, a twenty-three-year-old recent college grad, who has returned to his adoptive home following the disappearance of his childhood best friend Jacob Balfour. Jacob, who suffers from schizophrenia, has vanished in the past. But never for this long. Jacob’s mother insists he’s been doing better, on his meds, holding down a job. Mom leaves for work. Brandon spends the night in his old childhood bed. In the morning, he pokes around his missing friend’s room, uncovering a homemade conspiracy periodical, Illuminations, which tells Brandon that Jacob is anything but well.

Page 69 is our introduction to the character of Francis Balfour, the family’s estranged equally mentally ill grandfather. Francis is a stranger to Brandon, who came to live with the Balfours when he was quite young, on the heels of his own troubled childhood, so he has no conscious recollection of the old man. Through a confluence of events, Brandon, with great reluctance and apprehension, will find himself on a road trip with Francis, as the two men set out to discover what happened to Jacob.

This is the second time I’ve done the 69 test, and I am again surprised by how well it’s worked. I can’t recall the specifics of the last time (or even what book it was for!), but I remember being struck by how appropriate that passage was. It is spot-on this time as well. Francis is a pivotal character in The Shadow People. Though the story is told via first person through Brandon’s eyes, in many ways, the book is as much Francis’s story, he its narrator, which leaves us, the reader, to determine just how reliable his version of events are. Francis is Brandon’s foil. Not just in terms of age, with Brandon twenty-three and Francis in his seventies. Brandon comes across as a straight arrow, a “what you see is what you get” kind of character. Francis is, well, out there. The two men have opposing attitudes and viewpoints about Jacob, life, and everything in-between. The novel hinges on whose POV we accept. While at first, the answer seems obvious—Brandon, the one who isn’t crazy—the tone and twists of the narrative play with that assumption. Maybe in a crazy world, one needs to be a little crazy to survive. It certainly helps in their search for Jacob to have someone like Francis, who thinks like a madman thinks, a variation on “takes one to know one.”

The Page 69 Test: The Lakehouse.

My Book, The Movie: The Lakehouse.

My Book, The Movie: The Shadow People.