"Murder in a Teacup"

Vicki Delany is one of Canada’s most prolific and varied crime writers and a national bestseller in the U.S. She has written more than forty books: clever cozies to 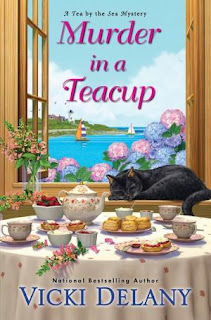 Gothic thrillers to gritty police procedurals, to historical fiction and novellas for adult literacy. She is currently writing four cozy mystery series: the Tea by the Sea mysteries for Kensington, the Sherlock Holmes Bookshop series for Crooked Lane Books, the Catskill Resort mysteries for Penguin Random House, and the Lighthouse Library series (as Eva Gates) for Crooked Lane.

Delany applied the Page 69 Test to the new Tea by the Sea mystery, Murder in a Teacup, and reported the following:

By page 69, the scene has been set at Tea by the Sea tea room, the tea drunk, the scones eaten. Guests have arrived at Victoria-on-Sea B&B overlooking Cape Cod Bay. And the guests are not, to put it mildly, getting on. Meanwhile, Rose Campbell, owner of Victoria-on-Sea tries to have a pleasant visit with an old friend, and Lily Roberts, owner and head cook at Tea By The Sea only wants to make tender flaky scones and delicious sandwiches and pastries.

We heard voices coming from the drawing room and Éclair ran in to say hello.

“Are you sure? Maybe you should wait to see how he is in the morning,” Brian said.

I popped my head in. “Sorry to interrupt. Is it Tyler? Is he having delayed problems because of the crash this afternoon?”

“Do what you want, Trisha,” Brian said. “I really don’t care. I’ve had enough drama for one day.”

“I hardly think it’s our fault your fool of a grandson stole a motorcycle,” Trisha said.

“I don’t think we want to get into that now,” Heather said. “But I agree with Brian. Let’s wait until morning. Oh, is that your dog, Lily? So cute. What’s his name?” She crouched down, holding out her hand, palm up, and clicked her tongue. Éclair’s little tail wiggled in ecstasy as she accepted the attention.

“I don’t need anyone’s approval.” Trisha pulled her phone out of her pocket. “I’m calling an ambulance.”

“I’m going to bed,” Brian said. “Wake me if something important happens. Darlene, are you coming?”

Brian walked past us, shaking his head. “Much ado about nothing,” he muttered as he went up the stairs. “Guy ate something that didn’t agree with him. Wimp.”

He passed Julie-Ann, coming down.

Trisha stood in the center of the drawing room, phone in hand. She glanced between one person and another, clearly undecided on what course of action to take.

Page 69 is a perfect reflection, I think, of Murder in A Teacup, as on this one page much of the conflict between the characters and their personal dramas comes out. By page 69 temperatures are flaring, old resentments are being remembered, and new ones created. Before we get to page 69, the B&B guests, a family visiting from Iowa, have enjoyed a full afternoon tea at Tea by the Sea. Apart from a minor accident when a teenage boy stole the gardener’s motorcycle and crashed into a stone wall (fortunately nothing hurt but his dignity) the tea appeared to have gone off without a hitch and everyone got on reasonably well. But on page 69 we realize that that might have been an illusion. One of the guests has taken ill, and the family feud raises its head again, when we see how everyone reacts to the news.

Page 69 also ends at a bit of a cliff-hanger. What will Trisha do? Call an ambulance, or let Ed sleep if off? Whatever ‘it’ is. And if Ed is sick, was it something he ate at Tea by the Sea? If so, what might be the consequences for Lily’s fledging tea room?

The Page 69 Test: A Scandal in Scarlet.