Hilary Davidson was a journalist before she turned to the dark side and started writing crime fiction. Her novels include the Lily Moore series—The Damage Done, The Next One to Fall, 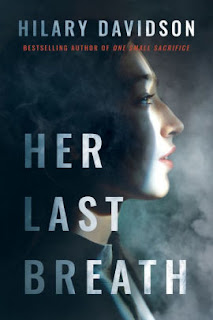 and Evil in All Its Disguises—the bestselling Shadows of New York series—One Small Sacrifice and Don’t Look Down—and the standalone novels Blood Always Tells and Her Last Breath.

Davidson applied the Page 69 Test to Her Last Breath and reported the following:

I found the printout of Caro’s email. “I got a message from my sister yesterday. She wrote it just before she died. You need to read it.” I slid it across the table so that he could.

“You got this yesterday?” Villaverde raised a dubious eyebrow. “She died over a week ago.”

“Caro set the message up to go out if she died.”

“How do we know this is legit? Anybody could set something up online.”

“My sister is the only person in the world who’d make these references to our family.”

He gave it a quick once-over. “She called you Dodo in it. That’s your nickname?”

“It was when I was in kindergarten. She was Caro and I was Dodo. That’s what our parents called us.” I didn’t understand why he was zeroing in on the least interesting part of the message. “There’s more to it than that. I keep thinking of Mom, and how you never believe you’re going to end up like one of your parents, until you do.” I took a breath. “That’s a reference to a letter my mother wrote a long time ago. It’s the real reason I know this email is from my sister. Literally no one else knows these details about my family.”

At that moment, it would’ve been easier to strip down to my underwear and hurl myself out a window than tell him the truth. But what choice did I have? “My father used to hit my mother. They argued all the time, and it would get physical. Especially when he was drinking, which was pretty often back then.”

“Were the police ever called?”

I started to laugh, before I caught myself. “We were supposed to act like it didn’t happen. In my family, it was a bigger crime to tell an outsider about private stuff than it was for my father to hit my mom in the first place.” My parents were immigrants from Northern Ireland; nothing was more sacred to them than their code of silence.

In this scene, Her Last Breath’s main character, Deirdre Crawley, has finally gone to the police with the disturbing message she received from her sister, Caroline, on the day of Caroline’s funeral. Deirdre has been reluctant to get the NYPD involved, but after trying to investigate herself and hitting a wall, she feels like she has no choice.

Part of the reason Deirdre didn’t want to go to the cops is because she doubts they’ll believe her. Caroline’s note told Deirdre not only that she was afraid of her wealthy husband, Theo, but that Theo killed his first wife and got away with it. At this point in the story, Deirdre has already confirmed that the note is legit, Theo was married before, and that his first wife is indeed dead. For Detective Villaverde to go back to Square One and question the legitimacy of the letter is frustrating for her and feels like a waste of time.

But there is more to Deirdre’s discomfort than meets the eye. She’s afraid of the police digging into her family history, which is mentioned in the letter. Detective Villaverde is not wrong to focus on that and to force Deirdre to spell out what Caroline is referring to. Deirdre is a character of action, one who wants justice, but she’s also terrified of revisiting her past. She would rather be alone and remain estranged from her family than discuss the abuse that happened when she was growing up. That code of silence she talks about her parents having is something she definitely inherited from them. But in this scene, Deirdre starts to understand that she can’t keep family secrets buried if she wants justice for her sister.

Learn more about the book and the author at the official Hilary Davidson site.

The Page 69 Test: The Damage Done.

The Page 69 Test: One Small Sacrifice.