"Death on the Night of Lost Lizards"

Julia Buckley has loved reading and writing since childhood. She is still a sucker for a great story, and, like any bibliophile, she loves libraries, Scholastic Book Fairs, 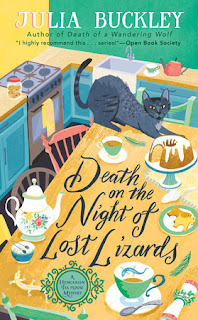 the smell of ink, pads and pens, typewriters, and books you can't put down. She lives in a Chicago suburb with her husband Jeff; she has two grown sons and a beautiful daughter-in-law.

Buckley applied the Page 69 Test to her latest novel, Death on the Night of Lost Lizards, and reported the following:

Page 69 of Death on the Night of Lost Lizards contains a bit of a spoiler for readers of the series, but it also identifies a very powerful central reality of the books: the psychic power of Hanna's grandmother. Runa Wolf, who was introduced in Book 2, had asked Hanna's grandmother to read her tea leaves. The older woman foresaw not only that Runa was pregnant, but that her baby, a girl, would face some unknown danger. Page 69 of Book 3 finally reveals the nature of that danger.

Browsers opening to this page wouldn't get a sense of the full story, which emerges as a rather complicated web, but would get a sense of several things. First, they would take note of the fact that Runa is confiding in Hanna. The two had grown closer by the end of Book 2 but this confidence marks a new intimacy in their relationship. Second, the reader can see a new maturity in Runa, whose previous priorities had been utterly different. Third, it is clear that both Runa and Hanna have complete faith in her grandmother's ability to see truths unavailable to others.

While page 69 does not reveal anything about the central mystery, it does focus on an underlying thread woven throughout the series. Themes of family, conflict, hope and the importance of making the right choice will be echoed in the larger mystery. These themes are symbolized as well by a tapestry which hangs in the tea house depicting the world tree or vilagfa, which depicts the upper, middle and lower worlds (similar to heaven, earth and hell) and implies that people's choices determine bliss or suffering.

The series is set at Christmas time, and the holiday backdrop also emphasizes the importance of hope and goodness within the human soul.

Learn more about the book and author at Julia Buckley's website.

My Book, The Movie: Death on the Night of Lost Lizards.