Katherine A. Sherbrooke is the author of Fill the Sky, which was a finalist for the Mary Sarton Award for Contemporary Fiction and the Foreward Indies Book of the Year, 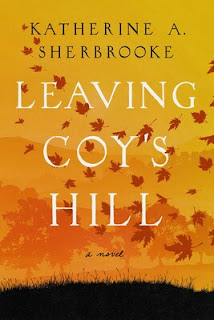 and won a 2017 Independent Press Award. She is Chair of the GrubStreet Creative Writing Center in Boston and lives south of the city with her husband, two sons, and black lab.

Sherbrooke applied the Page 69 Test to her new novel, Leaving Coy's Hill, and reported the following:

Page 69 of my novel is the end of a chapter—so only half a page—which sets up a key turning point in the life of my protagonist, Lucy Stone. She is a rule breaker—speaking out for the controversial idea of abolition in 1848, at a time when women speaking in public was considered scandalous—but at this point in the story, she’s working hard to fit in with her newfound colleagues, former idols and giants of their time like Frederick Douglass and William Lloyd Garrison, and determined to live up to their expectations. While the previous eight pages are “in scene,” offering a visceral description of that experience, page 69 simply summarizes several subsequent encounters.

Accordingly, this test is not a good one for the overall flavor of this novel. What the page doesn’t do is give a strong sense of the place and time in which Lucy lived, and the inner turmoil she battled at every turn. What brings this story to life (any story really) is rich detail—the weary looks of the women on whose doors Lucy knocked to advertise her lectures, frigid water from a hose turned on her as she gave a speech, the weight of the coins collected for her work, the mesmerizing touch of a man’s gloveless hand. Page 69 doesn’t include that kind of immersive experience, and so, I’m afraid, doesn’t do a good job of standing in for the rest of the book.

That said, the last two lines of the page do speak to two themes that run throughout the book:

“The hard work toward a shared goal created a camaraderie among us that I cherished. Until my fourth trip to Boston. That’s when everything changed.”

Lucy devoted her life to abolition and women’s rights, and her greatest triumphs and setbacks involved the presence or absence (in sometimes jarring ways) of support from colleagues and friends. But she was also a woman who kept her own counsel and wasn’t afraid to take a hard left across uncharted territory when she sensed a better way. The change the last sentence refers to redefines her life, and hopefully a reader who is interested in what comes next might pick up the book!