Gin Phillips is the author of six novels, ranging from historical fiction to literary thriller to middle grade. Her work has been sold in 29 countries.

Phillips’s debut novel, The Well and the Mine, won the 2009 Barnes & Noble Discover Award. Her recent novel, Fierce Kingdom, was named one of the 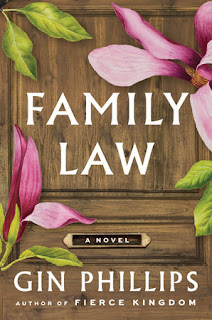 best books of 2017 by Publishers Weekly, NPR, Amazon, and Kirkus Reviews. Her novels have been named as selections for Indie Next, Book of the Month, and the Junior Library Guild.

Born in Montgomery, Al., Phillips graduated from Birmingham-Southern College with a degree in political journalism. She lives with her family in Birmingham, Al.

She applied the Page 69 Test to her new novel, Family Law, and reported the following:

Page 69 happens—luckily—to be one of my favorite scenes in the book. We find Lucia, a young lawyer, visiting with her mother in the kitchen as they get Sunday dinner ready. “There was a reason that they talked in the kitchen—dumplings and Jell-O salads filled the empty spaces. The past could do that, too. It was as if the two of them were standing far apart, separated by a huge bedsheet, a wide flat expanse. One old story would fold up the distance, bring them close, corner against corner.”

Lucia focuses on peeling a tomato as they talk, and she takes in the details of her childhood home, where she both belongs and doesn’t belong. “Most of the time she could barely remember the girl who had lived in this house, but there were moments—lace fluttering, wind smelling of honeysuckle and bacon and Barbecue Lay’s—there were moments where she was right under Lucia’s skin.”

We get a feel for the divide between Lucia and her mother in this scene, as well as the love between them.

My verdict: I’m a big fan of the Page 69 test. If someone wonders whether they would like Family Law, I’ll steer them straight to this page. The book is set in 1970s and ’80s Montgomery, Alabama, and centers around Lucia—who’s chosen a path very different from the women around her—and Rachel, a teenager who chafes at the rigid notions her own family has of what it means to be a girl. (Don’t wear your shorts too short. Don’t make a fuss. Smile more.) In Lucia, Rachel sees a whole new way of life.

This is a story with courtroom scenes and bullets and men who lurk in the shadows, but fundamentally it’s about the ways women shape each other and the complicated ways we’re bound together. For both these women, there’s a gap between the world they were raised in and the world they imagine for themselves. I think most of us, in one way or the other, feel that gap between the person our family expected us to be and the person we actually became. For Lucia and Rachel, that divide is partially about growing up in a world with such firmly drawn lines—men and women, black and white, right and wrong—and wanting to erase those lines and open up the possibilities. This scene on page 69 gets to the heart of how Lucia and her mother see the world differently and how their bond is both imperfect and powerful. It’s a good entry point for the rest of the novel.