Rachel Aaron is the author of The Spirit Thief and all the other Eli books forthcoming from Orbit. She lives in Athens, GA, (which, she always stresses, is not really Georgia, but a small island nation all its own adrift in the vast sea of East Georgia farmland) in a seventies house of the future with her husband, her son, and Lettie, a small, brown dog. 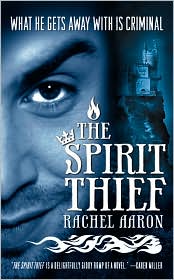 She applied the Page 69 Test to The Spirit Thief and reported the following:


When you dig underneath the magic, sword fights, and fantastical setting, The Spirit Thief is a character driven novel. The idea for the book started with the characters, and all of the action derives from the fallout of their choices. But while the main character and driving force of the novels, the charming wizard thief Eli Monpress, sprung into life fully formed, his foil and sometimes-enemy-sometimes-ally, the always moral Miranda, took a lot more time. She began out of necessity as the cop to Eli's robber, but as she took over more of the story it was clear that being a reflection of Eli wasn't enough. Miranda needed a personality every bit as strong as Eli's if she was going to believably stand up to him.

When I applied the Page 69 test to the US edition of The Spirit Thief, Miranda was the one in the spotlight. I won't quote it directly as I couldn't have picked a more context dependent scene if I'd tried, but I will try to lay it out as briefly as possible so you can get the idea. In this scene Miranda's forcing her way into a royal event after information she believes will help bring Eli, whom she rightly believes has stolen the king, to justice. Time is of the essence, and nothing, not protocol or politeness or the fact that she is not at all welcome in these lands, is going to stand in her way.

This scene is very typical of the book in that it shows a character being resourceful and determined. More specifically, it's one of the many small scenes that I put in to show Miranda for what she really is: a professional wizard nearing the height of her craft and a mature woman with a strong sense of right and wrong who isn't afraid of, or apologetic about, using her power to get the job done.

Read the first two chapters of The Spirit Thief, Book 1 in the Legend of Eli Monpress, at Rachel Aaron's website. Book 2, The Spirit Rebellion, is out now from Orbit books, and Book 3, The Spirit Eater, launches December 1st.