Charles Elton worked as a designer and editor in publishing before becoming a literary agent. Since 1991 he has worked in television and for the past ten years has been the executive producer in drama at ITV. Among his productions are the Oscar-nominated short Syrup, The Railway Children, Andrew Davies’s 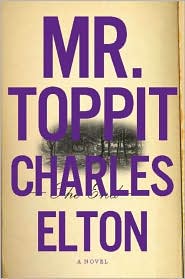 adaptation of Northanger Abbey, and the recent series Time of Your Life, all produced in association with WGBH Boston's Masterpiece Theater.

He applied the Page 69 Test to Mr. Toppit, his new novel, and reported the following:


Mr. Toppit is about an eccentric, dysfunctional English family and their brush with fame in America. At the beginning of the book, the father, Arthur Hayman, is run over by a cement truck and is dying in hospital. He has written an obscure series of children's books which are about to become world-renowned through the intervention of Laurie, an overweight radio presenter from Modesto, California, who was passing by when Arthur was run down. The mother, Martha, and their two children, Luke and Rachel, all head separately to the hospital, believing that Arthur has simply broken his leg. On Page 69, there is rather a chilling encounter between Martha and her 13-year-old son, Luke who run into each other by chance in the hospital lobby. It's a good page, as you realise for the first time that this is a very odd family indeed. Soon after page 69, they meet Laurie, also waiting at the hospital, and the strange confluence of events that changes all their lives is set in motion.

Read an excerpt from Mr. Toppit, and learn more about the novel at the publisher's website.