Joel Shepherd was born in Adelaide, South Australia, in 1974. He has studied Film and Television, International Relations, has interned on Capitol Hill in Washington, and traveled widely 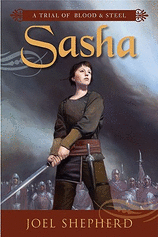 in Asia. His first trilogy, the Cassandra Kresnov Series, consists of Crossover, Breakaway and Killswitch.

He applied the Page 69 Test to Sasha, the first book in the A Trial of Blood and Steel series, and reported the following:

Page 69 of Sasha is an action scene. Our hero Sasha has smashed her way through the roof of a wooden training hall in a small town, to rescue the villagers intentionally locked inside from the fire that is taking hold. She was able to get in through the roof partly because she’s spent a lot of time in these old traditional training halls in the small towns of her land of Lenayin, and partly because being a woman of average size, she’s able to fit through the gaps more easily than the men.

The town’s name is Perys, and it is the first encounter Sasha’s northward-riding party has had with the flaring civil conflict between the northern provinces of Taneryn and Hadryn. The party is led by Sasha’s brother, Prince Damon, with instructions to keep the peace between the warring parties. The problem is that the central rule of a king in Lenayin is barely one hundred years old, and Lenayin’s regions have been fighting each other for more centuries than anyone can remember. So this peacekeeping mission is liable to run into some strife, being vastly outnumbered by warriors on either side. Prince Damon has not enough force to solve any dispute with arms, so he’s going to need to show guile and judgement. Damon’s princely qualities, however, are sometimes questioned in Lenayin, and some people wonder if he’s up to the job.

Sasha doesn’t make matters easier for him. Once a princess, Sasha now trains with her mentor Kessligh, the greatest warrior in Lenayin, and her loyalties lie on the side of the Goeren-yai, those who practise the traditional pagan beliefs of Lenayin. In the current conflict, that puts her on the side of Taneryn, whose leaders are all Goeren-yai, but the Great Lord of Taneryn is a great bear of a man named Krayliss, and he’s an arrogant and pig headed chauvinist. Deprived of decent leaders, many Goeren-yai are beginning to disdain the likes of Krayliss, and are looking instead at Sasha. But if Sasha sympathises with them too much, she’ll make an enemy of her own family, starting with her brother Damon...

Page 69 is I think fairly representative of the book in that it illustrates my intentions as an author -- to tell an entertaining tale with plenty of action, but whose primary events are driven by difficult decisions made by interesting people, who are forced to decide what they believe in, often at a painful cost.

Read an excerpt from Sasha and learn more about the land of Lenayin. Learn about the author and his work at Joel Shepherd's website and blog.