Mark Coggins is the award-winning author of The Immortal Game, Vulture Capital, Candy from Strangers, and Runoff. The San Francisco Chronicle has labeled 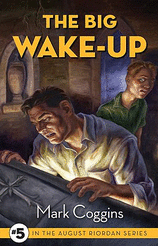 Coggins applied the Page 69 Test to The Big Wake-Up, his new August Riordan novel, and reported the following:

The Big Wake-Up envisions an altered version of the bizarre history of the peripatetic remains of Argentina's most famous first lady, Eva Perón. Rather than resting in the Duarte family tomb in La Recoleta Cemetery in Buenos Aires, I posit that the body in La Recoleta is a duplicate and that Eva's specially embalmed corpse has been secretly buried in the San Francisco Bay Area under a false name. A mad scramble for possession of the body ensues, pitting contemporary Peronists — who wish to return the body to Argentina to further political ambitions — against ex-military leaders from the 1970s, who wish to destroy Evita once and for all.

San Francisco private eye August Riordan is sucked into the maelstrom when an Argentine family hires him to investigate a seemingly unrelated matter: the location of a dead relative whose body was transferred from a Milan cemetery to somewhere in the Bay Area.

Page 69 of the book falls on the first page of a chapter titled, “Love Poems of Máximo,” which is illustrated with this photo of Cupid I took at Marie Antoinette's estate, Le Petite Trianon, in Versailles. In the chapter, Riordan and Melina Rivero, the step-daughter of his client, are walking to the Fairmont hotel in San Francisco to meet Melina’s father and provide a update on the investigation.

They have recently discovered a clutch of letters that one Máximo Vilas wrote to Melina’s sister, Araceli, who died in a brutal shooting at the beginning of the book. Riordan has tangled with Maximo already, but does not know his full name and his role in the investigation, so he’s hopeful something in the letters will provide a clue.

As they walk, Melina examines the letters, which are written in Spanish, and, it develops, are rather crudely worded expressions of lust, not love. She is moved to remark, “Well, he is no Cyrano de Bergerac, that is for certain.”

The chapter title is an ironic reference to the quality of the letters, but their discovery ultimately gives Riordan his first hint that his client has misrepresented the true objective of the search.

Read an excerpt from The Big Wake-Up, and learn more about the book and author at Coggins' website and blog.