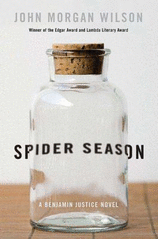 John Morgan Wilson is a veteran journalist and fiction writer. His Benjamin Justice mysteries have won the Edgar Allan Poe Award (AKA "the Edgar") for best first novel and three Lambda Literary Awards for best gay men's mystery. The latest is Spider Season (St. Martin's Minotaur), the eighth in the series, which began with the Edgar-winning Simple Justice in 1996, recently reissued by Bold Strokes Books.

The title Spider Season came to me one Spring afternoon as I was gardening in the small yard of my West Hollywood home. I lifted a stepping stone to uncover a bulbous black widow guarding a nest of cocooned eggs. I was startled, of course, but also inspired, and the title for my next novel came to me instantly.

At the time, I was just starting the manuscript, the eighth novel in the series. This time out, Benjamin Justice publishes his memoir, hoping to exorcise some demons and find redemption for a long ago scandal involving fabricated sources that destroyed his promising journalism career. Instead of providing Benjamin a degree of peace, the book's publication draws out several equally troubled people from his dark past and triggers a wave of harassment and intimidation that turns deadly.

Spider Season seemed an apt title for a story of poisonous creatures crawling out of the woodwork to instill fear and loathing, a "tangled web" mystery of growing paranoia and suspense. As events escalate, they ensnare not just Benjamin Justice, but a number of vulnerable people close to him. As I continued to write, I did some research into spider behavior, which had an unexpected influence on character and plot.

Two characters vital to the story are featured on page 69. Maurice and Fred, Benjamin's elderly landlords, have been important secondary characters since the series began with Simple Justice in 1996. A devoted couple for five decades, they have acted as a kind of moral anchor for Benjamin, providing him with a stable, supportive family that he never knew as a young man. In Spider Season, Maurice and Fred are in their eighties and facing personal challenges of their own. Fred, so burly and robust in earlier years, has grown especially frail. Page 69 underscores this, as well as the deep love and commitment the two men have for each other, along with a shared sense of gay history.

Because Spider Season is so dark and driven by suspense, the passages on page 69 are probably less representative than others of the tone and intensity of the novel as a whole. Yet this section involving Maurice and Fred helps to establish a poignant subplot about relationships and aging, endings and beginnings, that becomes woven significantly into the main plot line as it develops.

In a sense, Spider Season brings the Benjamin Justice series full circle, resolving a number of storylines and issues from earlier novels. Turning fifty, my protagonist faces personal choices about violence, love and family that are crucial to his emotional and physical survival. The book can be read on its own or as part of a series. What will happen to Benjamin in the future remains uncertain. Even I don't know that yet.

Learn more about the author at www.johnmorganwilson.com, where you can read the first chapter of Spider Season in its entirety.