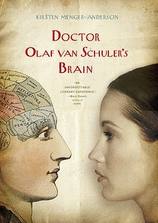 Kirsten Menger-Anderson's short stories have appeared or are forthcoming in the Southwest Review, Ploughshares, Maryland Review, Post Road, and Wascana Review, among other publications. Her work has been short listed for the Richard Yates Award, the Glimmer Train Short Story Award for New Writers, the Iowa Review Story Contest, and the Andre Dubus Award.

She applied the Page 69 Test to her recently released debut book, Doctor Olaf van Schuler's Brain, and reported the following:

"I'd be seen, as I saw my father, only in the thick lines of my nose or in the mossy brown color of my hair. Mother would have nothing if I disappeared. It was selfish of me to try."

The line is from the story "My Name is Lubbert Das," which is narrated by Lubbert Das, who was born with a stone in his head. His condition and subsequent cure are typical of the ones found in the book. Had this test been for page 169, the lines would tell of a Macy's clerk receiving electroshock therapy for a condition that is no longer diagnosed; page 269 relates the story of a woman who believes her illness may be related to her Silicone implants. The chapters move through time chronologically, each telling a medical tale of the times, and as we peer in at Lubbert on page 69, we see him and his mother consulting with Dr. Theodorus Clementius Steenwycks, who has just finished explaining that he could drill "an acorn-sized hole" into the boy's head to cure his dim-wittedness. Page 69 continues:

"Next week," Mother said. "I can bring him next week."

The faith in medicine and its power to heal appears repeatedly in the book. Characters eagerly quaff radium tonics with hopes that they will become more fertile, lobotomize siblings to cure madness, or rub hands over each other's skulls to diagnose personalities. We might see these techniques as primitive, even frightening now, but in the context of each story, the characters desire them. The page continues:

"Both Mother and Doctor Steenwycks stood, and in the mirror I could see them staring down at me. The room was large and the ceiling high, and for a moment I couldn't move. I'd remain forever in this one grand room of Doctor Steenwycks's grand house, which smelled sweet like honeysuckle and old like the docks."

The POV of this page is less typical of the book. Of the thirteen stories, only three are told from the first person. However, a number of the stories are set in the homes of doctors, so the setting is not unusual. The page continues:

"You take care of your mother now." Doctor Steenwycks extended an arm to help me rise, but when I turned from the mirror to take his hand, he'd moved it to the other side. He was backward, like everything since Father died and cart seventeen stopped arriving for my chopped kindling because the British were bad people. Perhaps the king's soldiers burned their furniture, too, though the only time I'd seen polished wood chairs in flames, the furniture had been stolen..."

The history of New York City unfolds throughout the book, which follows NYC from its days as New Amsterdam to British colony to the booming metropolis of today.

If you like page 69, please check out page 1, where Doctor Olaf van Schuler himself indulges his peculiar perversion: slicing heads.

Read an excerpt from Doctor Olaf van Schuler's Brain, and learn more about the author and her work at Kirsten Menger-Anderson's website and the "Regarding Dr. Olaf" blog.