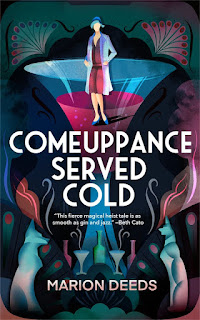 Marion Deeds was born in Santa Barbara, California and moved to northern California when she was five. She loves the redwoods, the ocean, dogs and crows.

She’s fascinated by the unexplained, and curious about power: who has it, who gets it, what is the best way to wield it. These questions inform her stories.

Deeds applied the Page 69 Test to her new book, Comeuppance Served Cold, and reported the following:

In Comeuppance Served Cold, most of page 69 is a song, a hate-filled street-chant aimed at the local shape-shifters.

Comeuppance Served Cold is a fantasy noir novella set in 1929 Seattle. Dolly White, the protagonist, has been hired by a powerful, wealthy man to keep his daughter from drinking and taking drugs until her arranged marriage occurs. The family has enemies, and one person in particular is very interested in the behavior of the rebellious daughter. Dolly has goals of her own, but she’s keeping them to herself.

On page 69 she and her charge, Fiona, are on their way to prepare for the engagement party when they pass a street demonstration against shape-shifters.

The chauffeur obligingly sings a couple of verses from the chant, which contain, among other things, references to weapons. Dolly questions the chauffeur about why shape-shifters are targeted in Seattle, and gets answers that mix casual bigotry with flat-out untruths, although it’s clear the driver believes them. The weapons mentioned come back into the story later on.

While page 69 doesn’t show the reader too much about the plot, it illuminates one of my themes perfectly. In the story I look at racism and hatred, specifically the deliberate fomenting of hatred against a group solely for the political or material benefit of others. Throughout the book Dolly has heard slurs against shape-shifters, but page 69 is a set-piece of the manipulation. I hope that Dolly’s skepticism also shows through—she’s not buying the shape-shifters-are-evil line for one little minute.

This page also shows us a bit of Fiona’s life and the household she was raised in. The reader sees why this young woman might have turned to alcohol and street-drugs. It’s clear Dolly’s going to be a disruption, and a big one.