"The Death of Jane Lawrence"

Caitlin Starling is the nationally bestselling author of The Death of Jane Lawrence (2021), as well as the Bram Stoker-nominated and LOHF award-winning 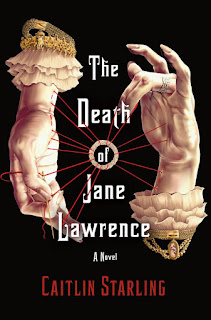 The Luminous Dead (2019). Her other works of genre-hopping horror and speculative fiction include Yellow Jessamine and a novella in the Vampire: The Masquerade collection, Walk Among Us.

Starling applied the Page 69 Test to The Death of Jane Lawrence and reported the following:

He sounded so disturbed by the idea that she fell back a step. “You wouldn’t really send me back to Larrenton in this storm, would you?” she asked. “It’s only one night. I-”

“Of course I wouldn’t,” he said. But he kept a distance between them that felt different from his unease that first night at the Cunninghams’, and different from their calculated dance after their kiss. “I’m sorry, Jane. I’m not myself just now. Lindridge Hall is not the best for my nerves. A howling storm isn’t wonderful for them, either, when you’re not sure if all the windows will hold through the night. But my room is safe, regardless; you’ll stay here, and in the morning if my regular carriage doesn’t come, I’ll see if I can’t borrow Mr. Purl’s horse and ride out and see how bad the damage is.”

He ducked his head. “I thought- I thought I was dreaming,” he said.

Dreaming. She’d caught him half awake, confused. Of course. That made all the sense in the world. Relief loosened the tight knots of her shoulders a fraction of an inch. “You’re not dreaming,” she said. She reached out to touch him, but he evaded her smoothly. “Perhaps- perhaps my presence will make you feel a little safer tonight?”

He laughed, though it was weaker than he usually sounded. “Lindridge Hall cannot be fixed by company and good cheer alone, I’m afraid.”

Page 69 drops us smack in the center of The Death of Jane Lawrence going full gothic. Jane has just arrived at her new husband’s house, Lindridge Hall, in the middle of a disastrous storm, even though he’s made her swear never to step foot there after sunset. And she’s found her husband acting… a bit strange. The first signs of fracture in an otherwise whirlwind romance, and the first indication that Lindridge Hall isn’t just crumbling and inconveniently far from town, but actively unwell in some way.

That line I’ve ended the excerpt on, “Lindridge Hall cannot be fixed by company and good cheer alone, I’m afraid,” is almost a thesis for the rest of the book. Jane, as I’m sure we all expected, winds up staying at the house for far more than this first night, and in the process, unearths all the dark secrets of her husband and his past. Bloody mistakes, occult magic, buried bodies…

Moreover, the house itself becomes, if not fond of her, certainly possessive– and she of it. Jane’s eventual obsession with the house could easily be likened to addiction (and so can her husband’s). And the deeper she goes, the more reality becomes unmoored.

It certainly would be nicer (easier, safer) if it could have all been just a dream.

The Page 69 Test: The Luminous Dead.