"The Mother Next Door"

Tara Laskowski’s debut suspense novel One Night Gone won the Agatha Award, Macavity Award, and the Anthony Award and was a finalist for the Lefty, the Simon and 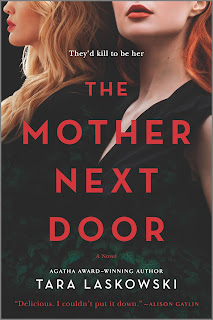 Laskowski applied the Page 69 Test to her new novel, The Mother Next Door, and reported the following:

"I tried to Google her online, and I couldn't find her," Bettina said.

Karma was a bitch.

I stood, paced the room. Outside, a car pulled onto the cul-de-sac, but it drove by Bettina's house and then ours, headed toward the pipe stem. When it passed, its headlights illuminated the dogwood.

That swaying branch wasn't a branch. There was something in the tree.

I put on my flats and stepped outside, into the front yard.

"Don't you think it's weird?" Bettina asked. "She's not on Facebook or anything either. I can't find any trace of her."

"Did you really think she'd become a big star?" I asked. Whatever was in the tree was thin and white, whipping around, bashing into the truck. I walked over, reached up to grab it, but it flew just out of reach.

"Jackie's been gone all these years," I said, balancing the phone between my ear and shoulder as I stretched up again. "There's been no trouble. Why now? It doesn't make any--"

My phone fell into the grass. I'd finally gotten a grip on the thing in the tree.

The white was lace. A dress. A doll.

"Kendra?" Bettina's voice, tinny and high, sputtered from the phone on the lawn. "What's wrong?"

I turned it around. And that's when I saw the face.

I bit my cheek and felt a salty warmth in my mouth.

I was a little nervous to look at page 69, because I was pretty sure the test wouldn't work, but I'm actually surprised that it has a lot of relevance to the overall themes and plot of the book. The Mother Next Door is a story about a group of mothers with a secret, and they spend a lot of the time trying to figure out who knows about their secret and is trying to expose them. In this excerpt, we see a little of that paranoia brewing between two of them. But you also get a sense of self-righteousness and entitlement here, too (that "Good" is very telling), which definitely colors a lot of the decisions this group of women makes. They are worried, but they don't want to show it.

The past is coming back to haunt them ("Why now?"..."Jackie's been gone all these years..."), and I like that this particular page shows the beginnings of their "investigations" to root out the problem and stop it before it gets out of hand.

Here you also get some description of the cul-de-sac where nearly entirely all of the book is set. Hints of creepiness, because it's Halloween season and everything is dying. And the doll hanging from the tree provides a sense of menace as well--is it a Halloween prank? Or something more?

So yes, overall, I am pleased to say that I think The Mother Next Door passes the Page 69 Test!