Thomas Perry is the bestselling author of over twenty-nine novels, including the critically acclaimed Jane Whitefield series, Forty Thieves, and The Butcher’s Boy, 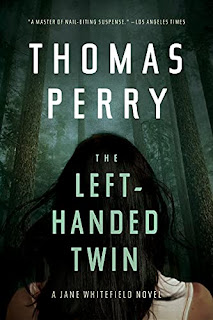 which won the Edgar Award. He lives in Southern California.

Perry applied the Page 69 Test to his new Jane Whitefield novel, The Left-Handed Twin, and reported the following:

Page 69 of The Left-Handed Twin is about 2/3 of the length of an average page because it's the opening page of Chapter 7, but there are complexities, both seen and unseen, in that space. In it Jane wakes up before dawn in an old house in a small town in Central New York belonging to Stewart, a forger who is Jane's favorite supplier of false identification for Jane's "runners," people who have good reason to believe they're about to be murdered, who come or are sent to Jane for help in disappearing.

She's just had a dream in which Harry Kemple, a gambler who came to Jane for help years ago and was murdered because Jane made the mistake of trusting a man who claimed to be Harry's friend, comes to talk. In the dream Jane and Harry try to puzzle out whether Jane's latest runner, Sara Doughton, is genuine or an imposter sent to entrap Jane. She said she'd been sent to Jane by her L.A. lawyer Elizabeth Howarth, an old college friend of Jane's who knows about her secret profession. At the moment when Jane wakes, she thinks "Why didn't she [Elizabeth] call first?"

It seems odd. Jane hasn't been out of Sara's presence since the first day, and Jane is now only carrying throw-away phones, so Elizabeth can't call her if she wants to. Jane decides to call Karen Alvarez, another L.A. lawyer and mutual friend and ask her to try to verify Sara's story or disprove it. On page 69 we're reminded that Karen Alvarez is someone who has asked Jane to save an innocent client, and later helped Jane make a convict disappear from a criminal court where he was testifying.

I think page 69 is fairly typical of The Left-Handed Twin. The situation is new, but old readers will know Jane's move is characteristic. Dream is a common way for Senecas to bring back what they've already observed and interpret it. Harry has visited Jane's dreams before, and serves as a reminder that if Jane makes a mistake, it has consequences. Jane's attempt on this page to clear up a detail in Sara's story that doesn't feel right is the way she operates. Jane generally believes Sara, and her eye for relevant detail is what keeps Sara alive. But Jane can never forget that each time she leaves home to give another person a new life, she's trying to rob murderers of their victim. There's very little that's more dangerous than that.

The Page 69 Test: The Informant.

The Page 69 Test: The Boyfriend.

The Page 69 Test: The Burglar.