Jeffrey B. Burton was born in Long Beach, California, grew up in St. Paul, Minnesota, and received his BA in Journalism at the University of Minnesota. 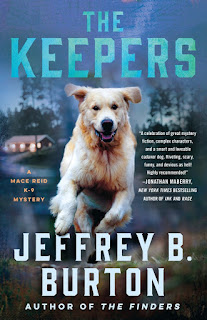 His many novels include The Finders, The Chessman, and The Eulogist.

He lives in St. Paul with his wife, an irate Pomeranian named Lucy, and a happy galoot of a Beagle named Milo.

Burton applied the Page 69 Test to his new novel, is The Keepers, and reported the following:

On page 69 of The Keepers, Special Prosecutor Peter Feist needs to meet with a confidential informant (CI) at Washington Park at midnight. His wife questions him as he's leaving the house but, as he's sworn to secrecy, he deflects his wife's queries by telling her how a close colleague of his has filed for divorce. A couple paragraphs then describe how Feist's colleague imagined herself in the perfect marriage, idyllic, that is, until she began viewing the video feed from the indoor security camera her husband had recently installed. And what she discovers on the video feed has her scampering to the office of the nearest divorce attorney.

Though it touches on a special prosecutor meeting with a CI at midnight, and there's something darkly humorous about the end of Feist's colleague's marriage, the page 69 test would not grant readers a good idea of the work as a whole. Peter Feist is not the protagonist and, of course, where are the human remains detection dogs?

The Keepers is about Mace Reid and the finders - his nickname for his pack of cadaver dogs - as they stay one step ahead of the powers that be that want Reid dead.

Q&A with Jeffrey B. Burton.