Richard Lange’s stories have appeared in The Sun, The Iowa Review, and Best American Mystery Stories, and as part of the Atlantic Monthly’s Fiction for Kindle series. 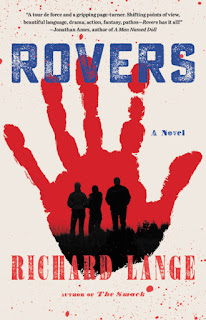 "Apocrypha" was awarded the 2015 Short Story Dagger by Great Britain's Crime Writers' Association. He is the author of the collections Dead Boys and Sweet Nothing and the novels This Wicked World, Angel Baby, which won the Hammett Prize from the International Association of Crime Writers, The Smack and the newly released Rovers. He received the Rosenthal Family Foundation Award from the American Academy of Arts and Letters and was a 2009 Guggenheim Fellow.

Lange applied the Page 69 Test to Rovers and reported the following:

On page 69 of Rovers, the two main characters of the book, Jesse and his mentally-challenged brother, Edgar, return to a Phoenix bowling alley where Jesse previously met a girl who is the spitting image of his long-lost love, Claudine. One thing to note about the brothers: They’re rovers, nearly indestructible beings who live by night and must consume human blood in order to survive.

Edgar sways and grunts and jabs at the flipper buttons on a pinball machine. Jesse’s at the bar. They’ve returned to the bowling alley after Jesse lay awake all day, buffeted by a flood of memories triggered by meeting Johona, memories he thought were lost to him for good.

There Claudine was, humming French songs in the moonlight; there she was, sipping champagne in a San Francisco hotel, New Year’s Eve 1902; there she was, the shine of her hair, the swish of her skirts, the seaside rhythm of her breath in sleep.

Time devours memories, gnaws the meat off them and crunches the bones. [AM1] Jesse’s always considered this a blessing. Better to be focused on the here and now when you’re forever on the hunt, forever being hunted. Better not to be daydreaming about Mama’s peach pie or a departed lover’s touch. But maybe he’s been wrong. Because tonight, for the first time in a long while, he doesn’t wish he was dead. In fact, after spending hours caught up in the torrent of reminiscence, he feels as if a crust of mud that’d been weighing him down has cracked and fallen away. That’s why, as soon as the sun set, he roused Edgar and said, “Let’s go back to that place we were last night.”

Someone opening to this page would get an intriguing glimpse of what the rest of the book is about, both in plot and theme. Jessie’s long-repressed grief over the death of Claudine and his desperate desire to save Johona, the girl from the bowling alley, from a similar fate are major motivators for his later actions, and this is the page where those drivers are introduced.

The page also contains an observation of the corrosive effect of time on memory, a theme the book returns to often, something inevitable in a story featuring characters who are essentially immortal and, some of them, already hundreds of years old.

Jesse’s decision to return to the bowling alley to see Johona again against his better instincts is the spark that ignites the book. When Johona winds up on the wrong side of a gang of savage rover bikers, the Fiends, all hell breaks loose, and Jesse, Edgar, and Johona are soon running for their lives across the American Southwest. Rovers is a supernatural-tinged revenge tale that I hope will both thrill and move readers, and this page, page 69, is where things start to get sticky.

Learn more about the book and author at Richard Lange's website.

The Page 69 Test: This Wicked World.