TJ Klune is a Lambda Literary Award-winning author (Into This River I Drown) and an ex-claims examiner for an insurance company. His novels include the 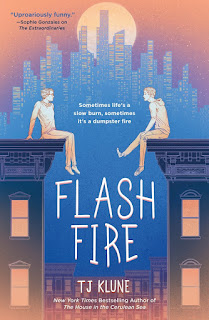 Green Creek series, The House on the Cerulean Sea and The Extraordinaries. Being queer himself, Klune believes it's important—now more than ever—to have accurate, positive, queer representation in stories.

He applied the Page 69 Test to his new novel, Flash Fire, the sequel to The Extraordinaries, and reported the following:

Page 69 of Flash Fire shows Nick Bell and his father—Aaron—having a discussion about the antagonist of the series—Simon Burke—and the history he shares with Jennifer Bell, Aaron’s deceased wife who is also Nick’s mother. Their familial histories are more intertwined than Nick knew, and he is learning the truth of certain events for the first time.

The “Page 69 Test” absolutely works for this book, and well at that. Nick’s relationship with his father has always been just as important as Nick’s romantic relationship with his boyfriend, Seth, but never more so than in Flash Fire. Aaron Bell is not a perfect man and has, in fact, made many mistakes, some small, some much larger. This is a big plot point in Flash Fire, the idea of trust and keeping secrets and the lengths people will go to in order to protect those they love. Aaron has kept certain things hidden from his son, but not because of anything malicious. As a single parent, he would do anything to protect his kid, even if that means going about it in ways that could potentially damage their relationship. In addition, it shows Nick finally being comfortable enough to ask questions he’s always wondered about but never found the courage to say out loud, given how fresh the passing of Jennifer is in both their minds. This particular scene also acts as a catalyst for Nick as he begins to understand that his father, while being honest here, is still hiding things, things that could affect the future of the Extraordinaries.

Flash Fire is about discovery, about dragging secrets from the shadows into the light, and dealing with the fallout from what’s revealed. It’s about trust and how tenuous it can be, and the hard decisions parents make in order to ensure their children are safe. Are they right? Are they wrong? Or does that even matter? There is power in truth, power in knowledge, and Nick’s past is about to collide with his present, changing the course of his future forever. It’s going to be a wild ride and I, for one, am so excited for the reader to see what happens.