"All Sorrows Can Be Borne"

Loren Stephens is a widely published essayist and fiction and nonfiction storyteller. Her work has appeared in the Los Angeles Times, the Chicago Tribune, 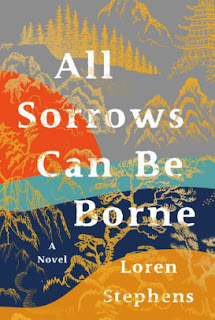 MacGuffin, The Jewish Women’s Literary Annual, Forge, Crack the Spine, Amuse Bouche, The Writer’s Launch, the Summerset Review, the Montreal Literary Review, and Tablet Travel Magazine to name a few. She is a two-time nominee of the Pushcart Prize and the book Paris Nights: My Year at the Moulin Rouge, by Cliff Simon with Loren Stephens was named one of the best titles from an independent press by Kirkus. She is president and founder of the ghostwriting companies, Write Wisdom and Bright Star Memoirs. Prior to establishing her company Stephens was a documentary filmmaker.

She applied the Page 69 Test to her new novel, All Sorrows Can Be Borne, and reported the following:

Page 69 is a glimpse into my heroine, Noriko Ito’s character in a scene where she speaks with her sister, Setsuko, the owner of a tearoom where Noriko has been working. Noriko has just failed her audition for the Takarazuka Theater Academy, and she is devasted – this is all she ever wanted. And at almost eighteen, she will not be offered another chance to audition. She must pivot and decide what is to become of her life. Her sister admonishes her, “I suggest you stop thinking about the Takarazuka and figure out how you can make yourself useful here [at the tearoom]. If you do a good job, who knows where you might end up?” She had pictured herself on stage under the spotlight. Now she will carry coffee and croissant to her customers. She asks Setsuko, “Will you call Mother and tell her I didn’t get in – and ask her to tell Father. He is going to be crushed and I just can’t bear to hear the disappointment in his voice. To make things easier, please let her know that I plan to pay him back [for all her singing and dancing lessons].”

And then as the final coup de grace she expresses how jealous she is of her high school friend who is accepted into the Takarazuka. “Mizuki’s father will be bragging all over town. He’ll probably put an announcement in the Hiroshima newspaper.” So we learn that not only have her dreams been shattered, but she has also disappointed her father who shared her aspirations, and she is jealous of her friend. Page 69 reveals Noriko’s emotional state, but it doesn’t foreshadow what will follow: That she will find temporary happiness, falling in love with the mysterious and handsome tearoom manager, Ichiro Uchida. She replaces her career ambition for romance – but will that be a satisfying tradeoff?

Therefore, the Page 69 test doesn’t work for my novel because Noriko’s character is radically transformed from a petulant, slightly spoiled teenager, into a young woman who must summon all her courage and strength to face a series of unimaginable challenges, which are not even foreshadowed on page 69. All the reader knows on page 69 is that she has suffered a girlhood disappointment and has to redefine her goals for her life leaving aside her dreams.

In the remainder of the novel, which is told primarily in Noriko’s voice, Noriko learns what it means to be a wife and mother, two roles that she is ill-prepared to perform. There are scenes where Noriko is ready to give up but somehow finds the courage to forge ahead to try and save her husband who suffers a communicable disease, and hold on to the precious little boy she has given birth to. In her darkest moments she sometimes wishes that she could trade in these roles for the life of an actress. At one point, she meets a famous Japanese film director who offers her a walk on part in his next movie. She weighs this opportunity against her obligations to her husband and son and refuses him. But the reader wonders if her choice is an honest one.

As this is a historical novel, I have interwoven many events of World War Two and its aftermath – the bombing of Hiroshima, the rebuilding of Japan as a bulwark against communism, changes in the role of women – and most especially the rights of women guaranteed in a new constitution including the right to vote. I’ve also given cameo appearances to President John Kennedy and his wife Jacqueline, U.S. Ambassador Edwin Reischauer and President Jimmy Carter. I’ve tried to give a nuanced picture of U.S.-Japanese relations, most especially from the perspective of the Japanese.

I wrote Noriko’s character taking into consideration how many historical events directly impact her, most especially the bombing of Hiroshima. For example, throughout her pregnancy she is afraid she might give birth to a monster as a side effect of what the Japanese learned was radiation.

The novel ends on a positive note. Hopefully, she is a heroine that my readers will love wishing her future happiness as compensation for all the sorrows she has borne.