Rob Hart is the author of The Warehouse, which has sold in more than 20 languages and been optioned for film by Ron Howard. 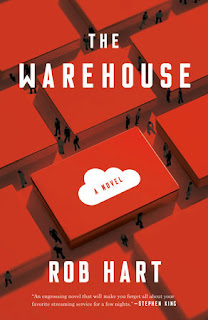 He also wrote the Ash McKenna series, which wrapped in July 2018 with Potter’s Field. Other entries include: New Yorked, which was nominated for an Anthony Award for Best First Novel, as well as City of Rose, South Village, and The Woman from Prague.

Hart applied the Page 69 Test to The Warehouse and reported the following:

On Page 69 of The Warehouse, Paxton is being briefed about his job as a security officer for Cloud by his new boss, Dobbs. It digs into the authoritarianism of the company, while at the same time reflecting Paxton's "go along to get along" attitude, because he's just sort of accepting that this company requires total obedience and will ruin your life if you mess up, and he's just happily taking notes, looking at the bright side of things. So it definitely speaks to one of the main themes of the book. That said, if you were just reading this and using this as your decision to buy it—I'm not sure how compelling it would be? It's very much being dropped into the middle of a scene without a whole lot of context. But as a concept is interesting. I would hope the writing and the creepy vibe is compelling enough to make a reader interested enough to check out the rest!