Raised in the Boogie Down Bronx, NoNieqa Ramos is an educator, literary activist, and writer of “intense” literature. She wrote the young adult novel The Disturbed Girl's Dictionary. 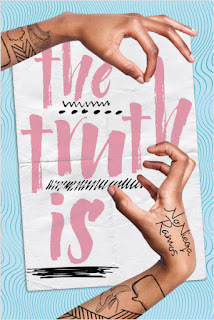 Ramos applied the Page 69 Test to her new novel, The Truth Is, and reported the following:


the peel. So Danny and I think we’re hilarious and set it on the stairs.

“So where were you this morning? Your ears are pierced.” I estimate 120 dollars’ worth of piercings from a homie who may have raided the janitors’ closet. Blanca and I did the research.

“Yeah.” He has wooden plates inserted into his ear holes. “Buddy of mine owed me a favor. Did it for free. But I had to do it this a.m.”

“Free? Except for the cultural appropriation, I like them.”

“So a buddy, huh? You and Blanca. She tried to DIY a tattoo once by reading a prison blog.” Ms. Trial-and-Error was planning on piercing her nose by hand and I was like hell to the no.

I said her name. Out LOUD.

“Is she in homeroom?”

Yeah. No. Yeah. “She’s not here.” Not on the stairwell. At the moment. Mostly. “Anyway, tats and piercings were her thing.” Gonna be her thing. “She was into fashion. Costumes, actually. Girl loved petticoats. Other girls walked around in shorties and tank tops. She walked around in the summer with a parasol. She always said she didn’t belong—” to this time.

“I love the suspenders. And the hats: bowler, Panama, fedoras. I could tie a Windsor knot like nobody’s business. Britches are badass.” Wait. The correct answer was I build sets.

“Actually, you couldn’t. Because Blanca had the cojones to walk through the barrio with a Victorian touring hat. She wore her personality on her sleeve. My personality ... is kind of stitched into a secret pocket.”

On this page we start with a reference to a banana peel being left on the stairs. A recurring private joke that’s shared among the Underdogs--Verdad and her new friends who are LGBTQIA+ and homeless-- is the banana. The banana is also featured in the art work and that’s because my book points it finger at the patriarchy and argues that gender identity should be fun and playful--not painful and assigned by patriarchal power structure.

The convo that follows is between Verdad, my fifteen-year-old protagonist who is recovering from the mass shooting death of her best friend Blanca, dealing with PTSD, and her love interest, transboy Danny. Danny has skipped school yet again, and at this point in the book, Verdad doesn’t know that he’s homeless or that her newly-evolving queer sexual identity may also subject her to the same fate.

Verdad has a big moment with Danny when she speaks Blanca’s name aloud for the first time since the funeral. Danny’s the first person she’s beginning to open up with and trust with her pain. They both have a lot of secrets to uncover before they truly understand each other. Verdad says, While Blanca “wore her personality on her sleeve. My personality … is kind of stitched into a secret pocket.”

Verdad talking about drama and costumes is connected to the whole theme of identity in the book and the idea that teens should be able to safely and joyfully try on different identities as they explore who they really are.