Thomas Perry is the bestselling author of over twenty novels, including the critically acclaimed Jane Whitefield series, Forty Thieves, and The Butcher’s Boy, 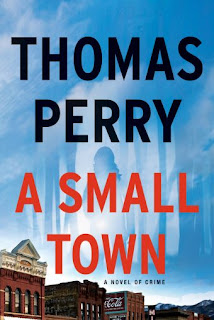 which won the Edgar Award. He lives in Southern California.

Perry applied the Page 69 Test to his new novel, A Small Town, and reported the following:

I do think that page 69 of A Small Town is representative of the rest of the novel. Leah Hawkins, the highest ranking surviving police officer of the small town of Weldonvillle, Colorado, has taken on a mission. Two years ago the town was destroyed by a break-out at the federal prison outside town. Twelve men planned and directed the break, setting over a thousand violent convicts loose to terrorize and destroy the town. All of the inmates were recaptured except the twelve. All are murderers. Leah takes a leave of absence and goes after them alone. She uses the money from a federal grant intended to rebuild the police department in order to find and kill them.

On page 68 Leah is in Naples, Florida, where she believes her first fugitive, Albert Weiss, will be. She thinks that after two years of freedom he will be nearly out of money, and that to get more he will do what he's always done, kidnap someone for ransom. Because he hasn't got any allies here, he will have to work alone, which means finding the easiest of targets, a child or a rich young woman who has been drinking. On page 69 Leah has found a potential victim, a young woman passed out in her convertible behind a bar. She watches her victim, regretting a little that she's found her because she can't leave her and search other places for Weiss. On the bottom of page 69, she sees a car pull up in the lot and a man get out and walk toward the unconscious victim. She realizes after a moment he is Albert Weiss. This is typical of Leah's actions in the book. She uses her two-year study of the escapees and her twenty years of detective experience to think her way into the presence of each killer.