Ashley Dyer is the pseudonym for prize-winning novelist Margaret Murphy working in consultation with policing and forensics expert, Helen Pepper. 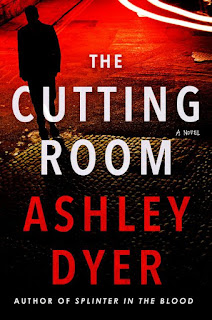 Murphy applied the Page 69 Test to The Cutting Room and reported the following:

By chance, page 69 of The Cutting Room provides a snapshot of the investigation, a glimpse into the mind of the serial killer at the heart of it, providing insights into the main protagonists, too. The Ferryman makes his victims the centrepiece of his art work, and here, detectives Greg Carver and Ruth Lake discuss his latest “art exhibit” with forensic psychologist, Dr Yi. “Catch the Gamma Wave” consisted of a row of laptop computers, propped open on a ledge of a natural sandstone escarpment not far from the city centre the night before. Each laptop screen was split into two parts; the top image showing a brain wave trace, the lower one, cardio.


[Ruth] hesitated, and Carver gazed at the space around her head.

Ruth knew that Carver had learned to read emotions like anger and guilt accurately, but complex emotions were trickier, and anyway she wasn’t sure if there was a colour for freaked out.

‘I did some background reading on gamma brain waves overnight,’ she said. ‘They’re typical of the brain state associated with “Eureka” moments – you know, sudden, unexpected sparks of insight or knowledge.’

Yi nodded. ‘There’s quite a lot in the literature about gamma brain waves and the “A-ha!” moment.’

‘Okay,’ Carver said. ‘And the brain waves on the laptop screens – were they actually gamma waves?’

‘I couldn’t tell a gamma wave from a microwave,’ Ruth admitted. ‘Doctor Yi?’

The psychologist leafed through the notes and printouts he’d brought with him. ‘Yes,’ he said. ‘In my opinion they are.’

They looked to Ruth to take up the story again.

How to explain it? ‘If you drop a stone in a pond; you’d expect the ripples to get weaker and shallower as the energy dissipates, wouldn’t you?’

‘Brain waves should behave in the same way,’ Ruth said. ‘So, when the heart stops, brain activity weakens, brain waves slow down, and finally, they stop.’

‘Kind of ... An academic study on rats found that a type of brainwave called “low gamma waves” got stronger – for up to thirty seconds after the animals were technically dead.’

Detective Carver survived a near-fatal attack in Book #1, but he was in a coma for days, and now, as he recovers from a serious brain injury, he sees auras of light shimmering around people. It’s rare form of synesthesia; more commonly, synesthetes will ‘see’ words as colors, or ‘taste’ sounds, but for Carver, the flashes of light and color seem to correspond to the moods of those around him, and he has begun to interpret the colors in order to gain insights into others’ thoughts and feelings. The auras are mentioned here, as Carver tries to read Ruth Lake. Here, too, Ruth demonstrates her background in science; a former CSI, she has researched gamma waves overnight, hoping to understand the warped message behind the Ferryman’s art.

The experiment she refers to on page 69 refers to a discovery that low gamma brainwaves become stronger and more synchronized in the 30 seconds after death (i.e. when the heart stops or a massive stroke occurs), indicating heightened, organised and focused consciousness. This revelation leaves us in no doubt that the killer is sadistic, calculating, and without conscience: the brainwaves prove that the victims were aware of what was happening to them—even after he’d murdered them.