"To Guard Against the Dark"

For twenty years, Canadian author/ former biologist Julie E. Czerneda has shared her curiosity about living things through her science fiction. She’s also written fantasy, the first installments of her Night’s Edge series A Turn of Light and A Play of Shadow, 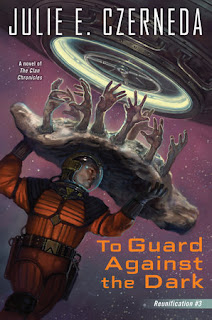 winning consecutive Aurora Awards (Canada’s Hugo) for Best English Novel. Czerneda has edited/co-edited sixteen anthologies of SF/F, two Aurora winners. Her latest is SFWA’s 2017 Nebula Award Showcase, and her next will be an anthology set in her Clan Chronicles series: Tales from Plexis. Her new SF novel, finale to that series, is To Guard Against the Dark.

Czerneda applied the Page 69 Test to To Guard Against the Dark and reported the following:

The driver dropped to the ground and ran away.

At first, the passengers seemed too stunned to move, their reactions comical, mouths flapping, arms waving--

Then one fragmented, components scurrying over the sides of the ramp and away—

—as the other two vanished from sight, without taking a single step.

Terk stared. Swallowed, hard. “Got to be a mistake. Problem with the vid.”

“No mistake,” Morgan said heavily. The Assembler? Given the source of the cargo, he’d have been surprised not to find one or more involved. As for the others?

“Don’t take this wrong, Morgan, but I thought the Clan were extinct,” Terk grumbled, as though this shift in his universe was a personal affront. “Thought the Assemblers made them extinct. We were sure.”

When I took up the challenge of checking my own page 69—would it be representative of the whole book, would it entice a reader--I wasn’t sure what I’d find. I’m delighted by what I did.

The relationship between Jason Morgan, my protagonist, and Russell Terk began in the first book published in the Clan Chronicles series, and there are now nine. Both Human, one driven by a personal code, the other a Trade Pact Enforcer tasked with preventing interspecies strife—and frequently frustrated in his attempts. Both formidable in their way. I’m sure readers of the series appreciated my putting them together as erstwhile partners.

As well, this snip sets up the underlying conflict of the final volume in the series: the Clan shouldn’t be here and what about the Assemblers? (Among my favourite aliens.) To anyone familiar with the series, or only the previous book, The Gate to Futures Past, their appearance is the sound of an alarm.

I do believe I passed the test.