"The Resurrection of Joan Ashby"

Cherise Wolas is a writer, lawyer, and film producer. She received a BFA from New York University’s Tisch School of the Arts, and a JD from Loyola Law School. 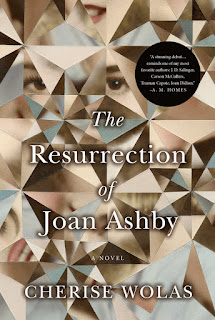 Wolas applied the Page 69 Test to The Resurrection of Joan Ashby, her debut novel, and reported the following:


Joan Ashby, acclaimed writer, which she always intended to be, and new mother, which she never intended to be, has refused her husband’s suggestion of a nanny. She has fallen in love with her unexpected child, and is not keen on having their very small house overrun. Eight weeks after giving birth to Daniel, Joan finds her study a frozen preserve, her typewriter lifeless and cold, and realizes Martin is right—a nanny would free up some hours for her work. A week later, Joan opens the door to a young woman who has come for the position. Despite the thirty-degree snowy cold, Fancy is coatless, gloveless, and hatless, sporting a tropical-colored dress. This young Canadian, with hair the color of wet sand, is a talker, a tea-lover, and eager to put to use her lifetime of caring for younger siblings.

Page 69 completes this “interview” between Joan and Fancy. And yet it’s not really been an interview at all—Fancy has talked about her life, how she and her best friend Trudy decided on Rhome because of the street named Strada di Felicità, about the Queen of England sipping soup, the shade of yellow paint Joan and Martin chose for the nursery that Fancy likes because of its positive psychological aspects, and has demonstrated she can change the sheets in the crib without waking the baby. Joan never liked Mary Poppins—“She hated that movie as a child, all that officiousness, as if children could not know their own minds…” but watching Fancy, Joan’s perspective alters. Fancy seems magical and usually solitary Joan instantly brings her into their lives.

I certainly hope this page would encourage readers to keep reading! Page 69 is representational of the book, in terms of its close attention to details, the way Fancy’s personal history further highlights the smallness of Joan and Martin’s own families, and continues the division between Joan’s prior solitary writing life and her current new life as a mother. But the page is an anomaly too—because Fancy could be a character in one of Joan’s stories. She also marks a quiet truth about the serendipity of connectivity that runs through the book.