Sarah Bailey lives in Melbourne, Australia and has two young sons. She has fifteen years experience in the advertising industry and is currently a director at creative projects company Mr Smith. 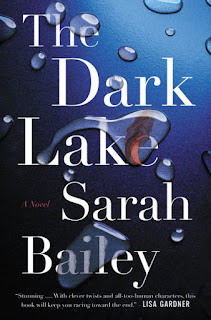 Bailey applied the Page 69 Test to The Dark Lake, her first novel, and reported the following:

By page 69 of The Dark Lake, DS Gemma Woodstock is completely entangled in Rosalind Ryan’s homicide investigation. She is in deep, both personally and professionally, and is trying desperately to manage the emotions that Rosalind’s murder has unearthed. The entire town of Smithson, located in regional Australia, is on edge in the wake of Rose’s murder.

Rose was Gemma’s high school classmate and always had a sense of mystery about her. At the time of her death, Rose was a popular teacher at the same school they attended a decade earlier. She was attacked after the opening night of the school play and there is a lot of pressure on the small regional homicide squad to solve the case. Who could possibly have wanted Rose dead?

Page 69 opens in the middle of one of the book’s flashback scenes and Gemma is reflecting on a three-year-old murder case that she solved. Being a young female in a male dominated work environment, this previous case saw Gemma’s professional challenges brought to the fore but ultimately enabled her to establish herself as a credible detective.

Gemma questioning her abilities is a constant theme in The Dark Lake and looking back on the old case is a good way for her to remember that she has a strong record and needs to back herself.


I don’t know whether Robbie would have killed her that night but I know the part of me that had been dormant for a long time came alive as I stood in that room with my arm out, heavy with the weight of the gun, my body burning with the ability to make the badness stop. It felt incredible.

Solving the Robbie murder case introduced Gemma to Candy Fyfe, the local journalist who becomes the bane of Gemma’s existence. Candy and Gemma are very different and Candy forces a lot of Gemma’s insecurities about her femininity to the surface.

When I was sitting across from Candy in her boss’s office, her perfect dark skin glowing, she was all sisterhood and girl power, and I know I came across as cold and prickly. She was not a good enemy to make but I felt sick and anxious, increasingly panicked about what the last few weeks of my Robbie obsession had allowed me to ignore.

The Robbie murder case coincided with Gemma being pregnant with her son Ben. Falling pregnant was a huge disruption to Gemma’s career and put a strain on her relationship with boyfriend Scott. It also caused a lot of her colleagues to question her ability to continue as a detective.

Over two years later, Gemma is a still a detective and also a mother to two-year-old Ben.
At page 69, the investigation into Rosalind Ryan’s murder is only just getting started, but already Gemma is struggling to manage her intense feelings for Felix, alongside guilt about her faltering relationship with Ben’s dad, all while keeping her reputation intact and her past in the past, as old high school secrets linked to the case begin to bubble to the surface.