Ryan Kirk is the author of the Nightblade series of fantasy novels and the founder of Waterstone Media. He was an English teacher and nonprofit consultant before diving into writing full-time in 2015. 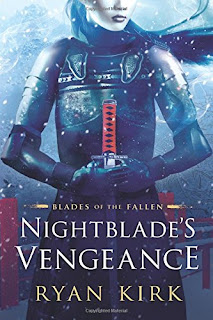 Kirk applied the Page 69 Test to his new novel, Nightblade's Vengeance (Blades of the Fallen, Book 1), and reported the following:

Opening up Nightblade's Vengeance to page 69 drops a reader right in the middle of a conversation between two men. The conversation is happening inside a prison, and one of the men, younger by many years, has been sentenced to death by his own people. Together, they are trying to understand how this young man's life became a pawn in a game between politicians.

Nightblade's Vengeance is the first of a new trilogy, and at page 69, much of the scene is still being set. However, the intrigue and mystery of the scene are fairly representative of the tone throughout the book. A kingdom, which has stood for ages, is poised on the brink of collapse, and the mystery at the heart of the story is crucial to the kingdom's fate.