"Ghost in the Tamarind"

S. Shankar is a novelist, cultural critic and translator. Most recently, he was honored by a Fulbright-Nehru Award (2017-2018) and was appointed the 2016 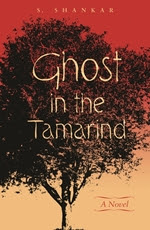 Shankar applied the Page 69 Test to his newest novel, Ghost in the Tamarind, and reported the following:

On page 69 the reader will enter the India of the late 1930s and find the two main characters of the novel, Ramu and Ponni, at a time when they are not yet fully past childhood. They have just met under trying circumstances—a few days earlier Ramu had stumbled upon the body of Ponni’s murdered father, Murugappa, under a tamarind tree. Now, Ramu, just returned from Ponni’s hut, lies on his mat reminiscing about her and her dog:


How the drops of water had glistened along the curve of Ponni’s neck.

And Ponni’s eyes. Yes, her eyes. Ramu felt mortified when he remembered how they had flashed with amusement at him. Indignantly, he turned over, throwing himself onto his other side. The sheet slid away, uncovering his head. Immediately the mosquitoes returned. The dog that had stopped barking started up again. He was certain it was Insect. It sounded very much like Insect. What a name for a dog! You might as well name a cow Peacock, or a man Stone. Why would anyone deliberately misname something?

Ghost in the Tamarind is among other things a love story. Ramu is a high-caste Brahmin and Ponni a so-called “untouchable.” On page 69, we find ourselves at the very outset of this improbable but not impossible romance. I wish I could tell you that the romance is all smooth sailing but of course it isn’t, and that is how politics enters the novel as is hinted at in the paragraph that comes immediately after:

If he ever saw Ponni again, he would demand that she explain herself. He had said he could go wherever he wanted and no one could stop him. That had been greeted with amusement both by Chellappa and Ponni. What was so funny about that? He would ask Ponni when—not if!—he saw her again.

Chellappa is Ponni’s uncle. A radical firebrand, he is one of the many characters (not all of them benevolent) who undertake the education of Ponni and Ramu in the ways of a caste-ridden world—a world monstrously exacting about who can go where and why. With this world, that I set out to detail in as psychologically and historically realistic a manner as I know how, Ramu and Ponni come into terrible conflict in the decades that follow.

I approached The Page 69 Test with some trepidation. My ideal for Ghost in the Tamarind was to create one seamless tapestry of character, events, descriptions—a text in which the whole is reflected in the part. I cannot say how close the novel gets to this ideal, but my hope is page 69 illustrates that it does at least to some extent.