S.F. Henson was born and raised in the deep south. She graduated from Auburn University with a degree in Animal Science, which she put to great use 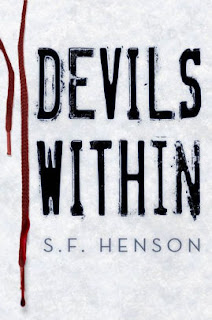 by attending law school. Her law degree has gotten some mileage, though, giving her the experience to write about criminals and other dark, nefarious subjects. She lives beside a missile test range in Huntsville, Alabama with her husband, dog, two oddly named cats, and, of course, the missiles that frequently shake her house.

Henson applied the Page 69 Test to her debut novel, Devils Within, and reported the following:

One day bleeds into the next. Fresh ink on damp paper. No one speaks to me. Not teachers, not students, not the black guy at the next locker, although he did smile my way a couple times. Not even Traitor talks, other than a few grunts. I’m invisible to everyone except my stinking social worker, who I wish would shut the hell up. All she does is babble about how good school is for me.

So I’m shocked to hear someone call my name on the Tuesday morning of my second week of school. I’m almost to the glass double doors when heels click on the pavement behind me.

My blood turns to ice. Only people at The Fort and the media call me that. I told the social worker I wasn’t safe. Now it’s too late. I’ve been found.

The page 69 test works surprisingly well for Devils Within. It’s the first page of a chapter, so it’s short, but I think it says a lot about my main character, Nate Fuller. He’s completely alone. No one to talk to, no one who cares enough to even say hello. And he feels that loneliness down deep, drapes it over him, lets it swallow him up every day. He felt alone at The Fort, the white supremacist compound where he grew up, because he didn’t share the hate that flowed through everyone there. He thought escaping would change everything. It didn’t. He feels just as alienated away from The Fort as he did within it, maybe even more so because he’s now hiding from the dangerous, violent people at The Fort and there’s no one he can share his past with. A past that is eating at him, slowly nibbling away all his edges until he’s afraid there will be nothing left. That loneliness really comes through in this passage.

I find page 69 compelling (then again, I’m the author so I’m a little biased), but I think a reader who flipped to this page would be sucked in and want to read more.

My Book, The Movie: Devils Within.