M. Tara Crowl grew up in Murfreesboro, Tennessee. She studied Cinematic Arts at the University of Southern California, then received 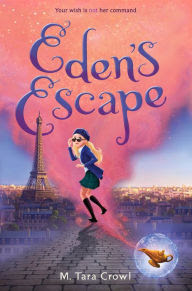 an MA in Creative Writing at Macquarie University in Sydney, Australia.

Crowl applied the Page 69 Test to her latest novel, Eden’s Escape, and reported the following:


Eden’s Escape was released by Disney-Hyperion in September. It’s the sequel to my first middle-grade novel, Eden’s Wish, in which our protagonist, a 12-year-old genie named Eden, escapes her lamp and tries to pose as a regular girl on Earth. Naturally, she doesn’t get away with it. But to her surprise, when she returns to the lamp, its ancient rules change so that she can become the first genie in history to live on Earth while continuing her career as a genie.

At the beginning of Eden’s Escape, Eden finds herself in New York City with a genie alum named Pepper who will be her guardian. Eden loves the city and her new life there. But just as she’s getting comfortable, she’s whisked away for a granting.

The wisher is a tech mogul named David Brightly, who, Eden quickly learns, did not find the lamp by accident. She also realizes that Brightly won’t be satisfied with three wishes; he wants the lamp’s full power for himself. He straps Eden into a chair, takes the lamp out of her sight, and starts performing tests on her. Eden knows she can get out of this if she can make a request for reentry, a special allowance for grantings that have gone wrong—but in order to do it, she has to see the lamp. She refuses to answer Brightly’s questions until he shows her the lamp, so he relents and takes her to his lab.

But there’s something very wrong. The lamp is inside a cage made of black metal bars, encased by a purple glow. Brightly tells her that the purple glow is an ionic plasma shield. This is where we begin page 69.

“But I thought those were only in stories!”

“Strange, I used to think the same thing about genies,” Brightly said. His lips curled into a smirk. “When you’re on the cuttin’ edge of technology research, lots of things exist that the rest of the world would still call make-believe.”

Eden had learned about plasma and its properties in Xavier’s physics lessons. It was one of the four forms of matter, along with solids, liquids, and gases. Of the four, it was the most abundant form in the universe; but on Earth, it generally existed only in labs.

“But why?” Eden demanded.

Brightly was gazing absorbedly at the plasma-encased lamp. “It’s a little precaution we took. We don’t want any external interference while we’re investigatin’.”

Eden’s breath grew shallow. Would her request for reentry work with plasma blocking the spout? Xavier and Goldie might not be able to see or hear through the telescope.

Still, she had to try.

“Request for reentry!” she cried desperately. “I need to go back!”

She squeezed her eyes closed, willing it to work. She longed to be back in New York, right by Pepper’s side.

But when she opened her eyes, nothing had changed.

This is the point where the book’s action really kicks off. Eden’s plan to get away from Brightly has failed, so she has to find a different way to escape. You’ll have to read to find out what she does—but I will tell you that it involves a laser, an explosion, a disguise, and the city of Paris.