David Anthony Durham received the 2009 John W. Campbell Award for Best New Writer of Science Fiction for Acacia and The Other Lands (the first two volumes of the Acacia trilogy). 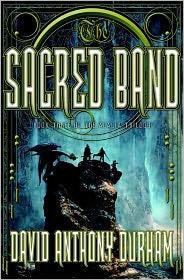 He applied the Page 69 Test to The Sacred Band, the concluding volume of the trilogy, and reported the following:


The Page 69 Test gives me trouble every time. This time may be the most problematic. As per usual my page doesn’t manage to touch on the big plot elements of the book that well. I don’t know what page would, since this is a series of biggish books with scores of different characters. That’s not the real problem, though.

What is a problem is that I can’t quote any lines from that page without giving away some major plot spoilers. The Sacred Band is the third and concluding volume of the series. A lot has happened by the point. Quite a few characters have lived and died at, and others have emerged into positions of power that may not have been expected at the start of the series. Since I always write about the books in the hopes that new readers will be drawn in, I figure I shouldn’t give away any of those plot details now.

So, I won’t quote from the page.

I won’t name any characters.

Instead, I’ll speak of them in more general terms. Let’s see if this works…

The scene on page 69 involves four people, and also is heavily influenced by a fifth, that’s not actually in the scene. There is a prince, a young boy that feels quite confident about his place in the world. There is a dead person that’s been brought back to life. There is a man cursed with stone eyes, through which he sees a grey, coarse version of the world. There is a royal secretary, the closest confidante to the queen - the prince’s mother.

It’s a scene of casual conversation on the palace grounds. It’s a scene important not for what is said, but for what’s not said. You see, the absent character - the queen - has cast spells of varying sorts over each of the four. In the case of the boy, the influence is mostly that of mother over son. She has schooled him to see the world and his future role in it in a certain way. As yet this hasn’t been challenged, but it will be soon. The queen had plucked the secretary from a life of exile and disgrace. Because of it she’s loyal to her completely, no matter the crimes the queen perpetrates to meet her goals.

The two men have been trapped with sorcery. The dead man has been raised as a symbol to the nation of the queen’s power. She claimed that she was also bringing him back to help her rule, but instead she’s effectively controlled his thoughts. He has moments of truly thinking on his own, but before he can express himself the words that leave his mouth morph into the words the queen would want him to say. It’s frustrating, but he’s only vaguely aware of it.

The man with the stone eyes is the point of view character for the scene. His stone eyes were punishment inflicted upon him by the queen for being a firebrand that preached rebellion. The true curse she inflicts on him, however, is to become her mouthpiece. He’s been forced to travel the empire, giving speeches in her behalf. He never does this intentionally. He tries to rail against her. He always thinks he’s doing so, but discovers afterwards that the words that he spoke were never the ones he thought he was speaking. He’s much more aware of this than the dead man, and he feels particularly tortured by it.

That’s the dynamic that’s at play during the quiet conversation on page 69 of The Sacred Band. The question at the heart of it - about the nature of absolute power - is a big part of what the book is all about. I was interested not in power in general, but in how power manifests itself when shaped by an individual’s life experiences, fears and worry and hopes. That’s what’s happened with the queen, and the story - at this point in the series - is starting to build toward seeing the ramifications of that explode in a variety of chaotic ways.

The Page 69 Test: The Other Lands.