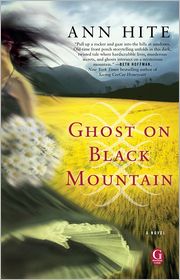 She applied the Page 69 Test to her new novel, Ghost On Black Mountain, and reported the following:


I’d like to say I woke up on New Year’s Day, looked in the mirror, and understood what being married to Hobbs was doing to me, but that would be a fairytale of the worst kind. Instead each time Hobbs hurt me, I saw him clearer. The problem was, what would he have to do to make me understand the whole truth?

New Year’s Day was cold but sunny. I walked over to Shelly’s little house.

Mrs. Parker opened the door with a frown on her face. “What you need, Mrs. Pritchard?”

“I need Shelly’s help. It’d only be for today.” I knew Shelly was there. I could feel her listening.

“Your husband made it clear…”

“My husband isn’t here and no telling when he’ll come back, if he does this time.” I looked her dead in the eye. “I want to work in the attic and I don’t want to go alone.” This was true. “I’ll pay her, not Hobbs. He’ll never know.”

Mrs. Parker studied me for a minute. “You need to go home.”

In the first paragraph of page 69, the tone of the book is reinforced. Ghost On Black Mountain is narrated by five women of varying ages and ethnic backgrounds. The book is about choices made and how they ripple throughout these women’s lives, along with those connected to them. But it is here on page 69 that Nellie Pritchard speaks a universal truth. So often we expect change, whether it is physical or emotional, to magically appear. But Nellie recognizes—as it is with many people—when given the opportunity to break out of our script, we turn from the hard road of reality to a more comfortable safe place. It’s only when we can no longer ignore what sits in front of us that we embrace the decision to facilitate a new life direction. And so it is with the characters in Ghost On Black Mountain.

Learn more about the book and author at Ann Hite's website and blog.