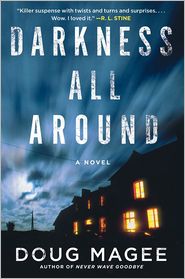 He applied the Page 69 Test to his new novel, Darkness All Around, and reported the following:


Page 69 in Darkness All Around is the beginning of a chapter and is a somewhat pivotal moment in the book. Risa, who owns the town hangout restaurant, has heard rumors that her ex-husband Sean, whom she had declared legally dead, is back in town. On this page Risa gets a call from her cousin, who is opening the restaurant that day, and who tells her people coming in for breakfast are saying they saw Sean around the small Pennsylvania town they live in. This confirmation of the rumors is of course unsettling to Risa and sets her off on a mission to find him. And the page also is an introduction to the part the town itself will play in the unfolding of the mystery ahead.

Learn more about the book and author at Doug Magee's website and the Darkness All Around website.