"The Sky Is Falling"

Caroline Adderson is the author of two internationally published novels (A History of Forgetting, Sitting Practice) and two collections of short stories (Bad Imaginings, Pleased To Meet You). Her work has received numerous prize nominations including the Scotiabank Giller Prize longlist, the Governor General’s Literary Award, the Rogers’ Trust Fiction Prize, and the Commonwealth Writers’ Prize. A two-time Ethel 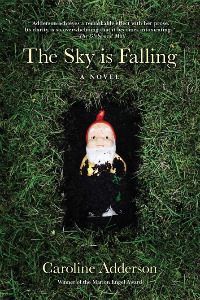 Wilson Fiction Prize and three-time CBC Literary Award winner, Caroline was also the recipient of the 2006 Marian Engel Award for mid-career achievement. Her latest novel, The Sky is Falling, was selected as a Quill and Quire Best Book and a Globe and Mail Top 100 Book of 2010.

She applied the Page 69 Test to The Sky is Falling and reported the following:


The pertinent passage from page 69:


On the crest of the hill, at the four-way stop just before the descent to Arbutus Street, there’s a bit of a view northward toward the mountains, over other cotton-candied streets. Two varieties of flowering trees were in bloom, one a darker and one a lighter shade of pink. I drove through the frothy tunnel of 33rd Avenue, past the bright armies of daffodils amassing in the mansion gardens of Shaughnessy. All these carnival colours. All this spring cheer. It’s a bit much, I thought.

The radio brought the story up again while I was driving. I could have switched it off but was better prepared now after an hour of consciously avoiding thinking about it. It was over in a few sentences anyway. Sonia Parker, one of the “masterminds” of a 1984 bomb plot gone awry, had been released yesterday. Peter English would be released in 2009. The next item, in keeping with the terrorist theme, was about the Guantanamo Bay detention camp.

When I reached the parking lot, I sat in the car for a few minutes until I was breathing normally again.

The Sky Is Falling tells the story of Jane Z., mother of a teenage son, who every spring looks back on the time when, as a 19 year-old university student, she became involved with a supposedly non-violent group of anti-nuclear activists. Things went drastically wrong and she has paid the price for twenty years by living in continual dread that her son will find out about her past, that something terrible will happen to him too, and that the world is just generally doomed. Until page 69, which is in a present time section of the book -- Jane fleeing the house to avoid reading the newspaper article about her former friends that landed on her doorstep that morning -- the reader doesn't know what actually happened back in 1984, so there is a big revelation here. The interest shifts from what to how could it happen? The motif of the flowering cherry trees, which are so emblematic of the city the novel is set in -- Vancouver, Canada -- is reintroduced here. By page 69 the reader will hopefully also recognize them as reference to Chekhov's The Cherry Orchard, Jane being a student of Russian and Russian literature. They will bloom again later, at the climax of the novel, as the petals fall, literally and figuratively, from the sky.

Learn more about the book and author at Caroline Adderson's website.