A former Oklahoma public school English teacher, Sheldon Russell retired as a professor emeritus from the University of Central Oklahoma in 2000. With The Yard Dog (Minotaur Books, 2009), he introduced the Hook Runyon series. The first book finds Hook investigating a murder at an Oklahoma railroad yard near a German POW camp during WWII. 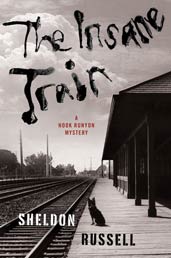 Russell applied the Page 69 Test to the second Hook Runyon novel, The Insane Train, and reported the following:


He went to bed but couldn’t sleep. After seeing the security ward, he was more convinced than ever that moving them as a group was a misguided strategy. Add in the missing links of a fatal fire, and it all came down to a dangerous assignment indeed.

Page 69 is the end of Chapter 9 and reflects the essence of railroad yard dog, Hook Runyon’s, dilemma. After a devastating fire in an insane asylum, Hook is charged with transporting the remaining inmates by train to an abandoned fort in Oklahoma. To complicate matters, a substantial number of the inmates are from the criminally insane ward, help is hard to come by, and the law prohibits the use of weapons in their management.

Desperate, Hook hires a motley crew of vets who are living under a bridge to assist him, and thus begins one of the wildest train rides in history.

Learn more about the book and author at Sheldon Russell's website.