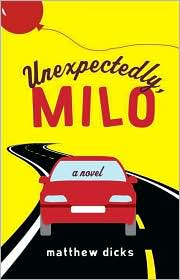 He applied the Page 69 Test to Unexpectedly, Milo and reported the following:

Page 69 turns out to be surprisingly quite representative of Milo, the protagonist in Unexpectedly, Milo, and it’s actually part of the chapter that I have been reading on my most recent book tour. Milo is a man who is plagued by a variety of compulsions (he refers to them as demands) which impugn on his ability to think and act until these demands are satisfied. He has kept these compulsions a secret from his wife (and everyone else in his life), which is probably one of the reasons his marriage is falling apart.

Page 69 touches upon two of these compulsions:

1. The need to watch a film over and over again in the hope (and expectation) that the disappointing ending will one day change. In this case, Milo, who is also a nerd of sorts (page 69 also references Milo’s Dungeons and Dragons hobby), is watching Episode 1 of the Star Wars prequels.

“Had Windu killed Palpatine or had Obi Wan tossed his apprentice into the river of lava like he should have, Milo imagined that the feeling of fulfillment would be indescribable. And if it actually happened someday, part of him wouldn’t be surprised one bit.”

2. The second compulsion discussed on page 69 is Milo’s need to release the pressurized safety seals on jars of Smucker’s grape jelly (one of his most common compulsions). This hiss of the seal being broken is as satisfying as almost anything else in Milo’s life, and therefore he is often forced to purchase dozens of jars at a time.

“Milo opened three more jars of jelly before the demand was satisfied and he was able to return home.”

Lastly, the page also makes references to a poem that Milo has clipped from a Highlights magazine earlier in the day. Though he is not sure why the poem, which was written by a child, appeals to him so much, he finds himself becoming drawn to its words more and more as the story continues.

“But before pulling out of his parking spot, he removed the page from the Highlights magazine that he had acquired earlier that day and read through the poem once again. He hadn’t thought much of it at first, but he found that it was growing on him.”

Overall, page 69 offers a surprisingly broad view of the story, even though it ends a chapter and the words only fill about half of the page!