Anthony Doerr is the author of a collection of short stories, The Shell Collector, the novel About Grace, and a memoir titled Four Seasons in Rome. 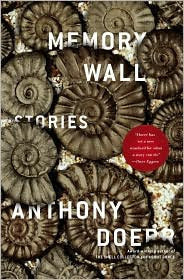 His books have been a New York Times Notable Book, an American Library Association Book of the Year, a "Book of the Year" in the Washington Post, and he has won the Barnes & Noble Discover Prize, the Rome Prize, the Hodder Fellowship from Princeton, and shared the New York Public Library's Young Lions Fiction Award.

Doerr applied the Page 69 Test to his new story collection, Memory Wall, and reported the following:

On Luvo’s fourth morning, wandering below the pass, perhaps a half mile from the road, he turns over a rock the size of his hand and finds pressed into its underside the clear white outline of what looks like a clam shell. The shell is lighter than the stone around it and scalloped at the edges. The name of the fossil rises from some corner of his brain: Brachiopod. He sits in the sun and runs the tips of his fingers over the dozens of grooves in the stone. An animal that lived and died eons ago, when this mountainside was a seabed, and galaxies of clams flapped their shells at the sun.

The top of page 69 is, somewhat astonishingly, very representative of the book. Memory Wall is about memory and its erasure: through disease, through war, through governmental policies. Here on page 69 a young South African boy finds a fossil out in the Great Karoo (a huge arid area some people call the Big Empty). It's the first fossil he's ever found. The passage is about time, and about plucking one indelible thing out of the ground, one record of one life, which is in a sense, what all six stories in the book are about: the very human hope that we can each leave something behind which will outlast us.

Read an excerpt from Memory Wall.